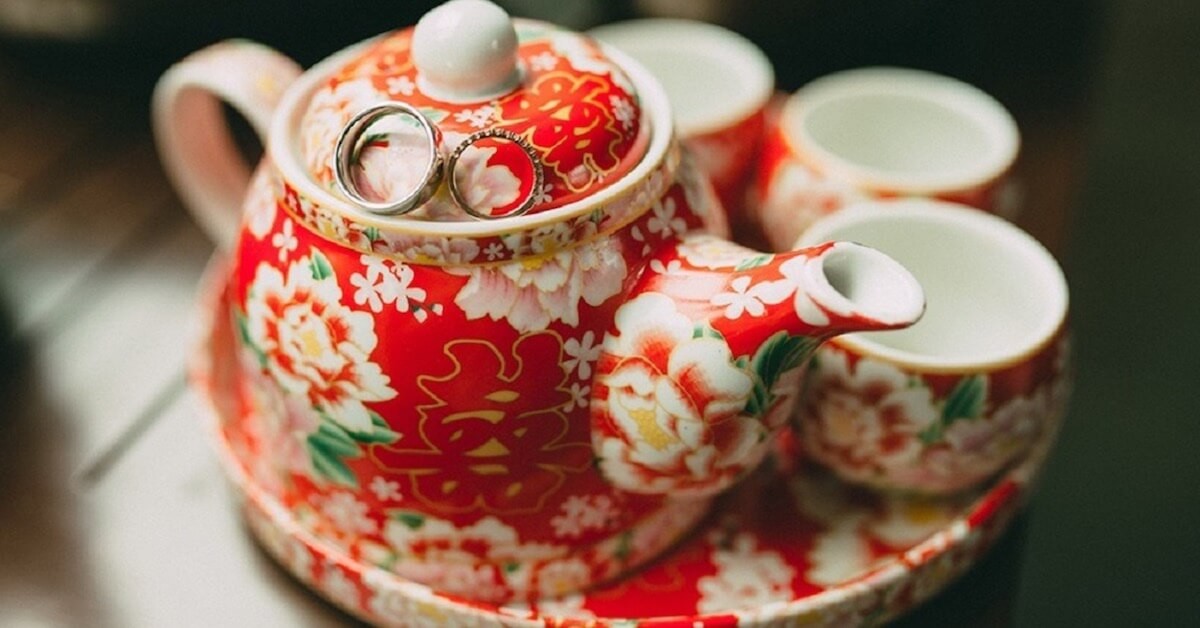 Despite the shift towards the modern, westernised wedding practices, many couples today still incorporate some of our age-old Chinese wedding traditions on their big day as a means to celebrate our heritage and cherish our roots. But with so many rituals involved, it can get quite confusing, so here are 6 common traditions that you are most likely to encounter at a Chinese wedding!

It’s no secret that the Chinese love the colour red. From the wedding invitations down to the details of the wedding decor, it is common to see the auspicious colour in all sorts of varying shades – pink, peach, salmon, and orange – combined with gold, because these symbolise a new life, happiness, good luck, and support for the everlasting union of the couple.

Black and white colours are usually avoided at a traditional Chinese wedding because of their association with sadness and death, so make sure not to turn up in those colours if you don’t want to seem impolite and bring “bad luck” to the couple! Just remember – the brighter, the better.

An important event that takes place about 2 - 4 weeks before the wedding, the groom is expected to present a basket of betrothal gifts to the bride’s family as a formal proposal.

Depending on the dialects of the family, some of the gifts may vary, but most are generally the same – they all signify good fortune, abundance, and prosperity. These include candles, roasted pork, jewellery, traditional wedding cakes, and more.

Upon receiving these gifts, the bride’s parents will then formally accept the gesture of goodwill and agree to leave their daughter in the groom’s care, while also returning gifts in reciprocation and gratitude. Once this procedure is complete, the couple is officially engaged!

Here’s where the real fun begins –  on the actual wedding day, the groom and his “band of brothers” will have to go over to the bride’s house in the morning to fetch her to the wedding.
The catch? He and his best men will be put to the test with a series of challenges devised by the bridesmaids before they are allowed to enter the bride’s house!

The challenges can range from answering tough questions about the bride to being tasked to go on scavenger hunts around the neighbourhood, but the most common one includes eating strange food combinations that consist of the 4 requisite flavours, bitter, spicy, sweet, and sour.

Once the groom completes the tasks or until the bridesmaids deem his efforts satisfactory, he will have to present the bridal party with red packets as a means of compensating them for their trouble before he can meet his beloved. 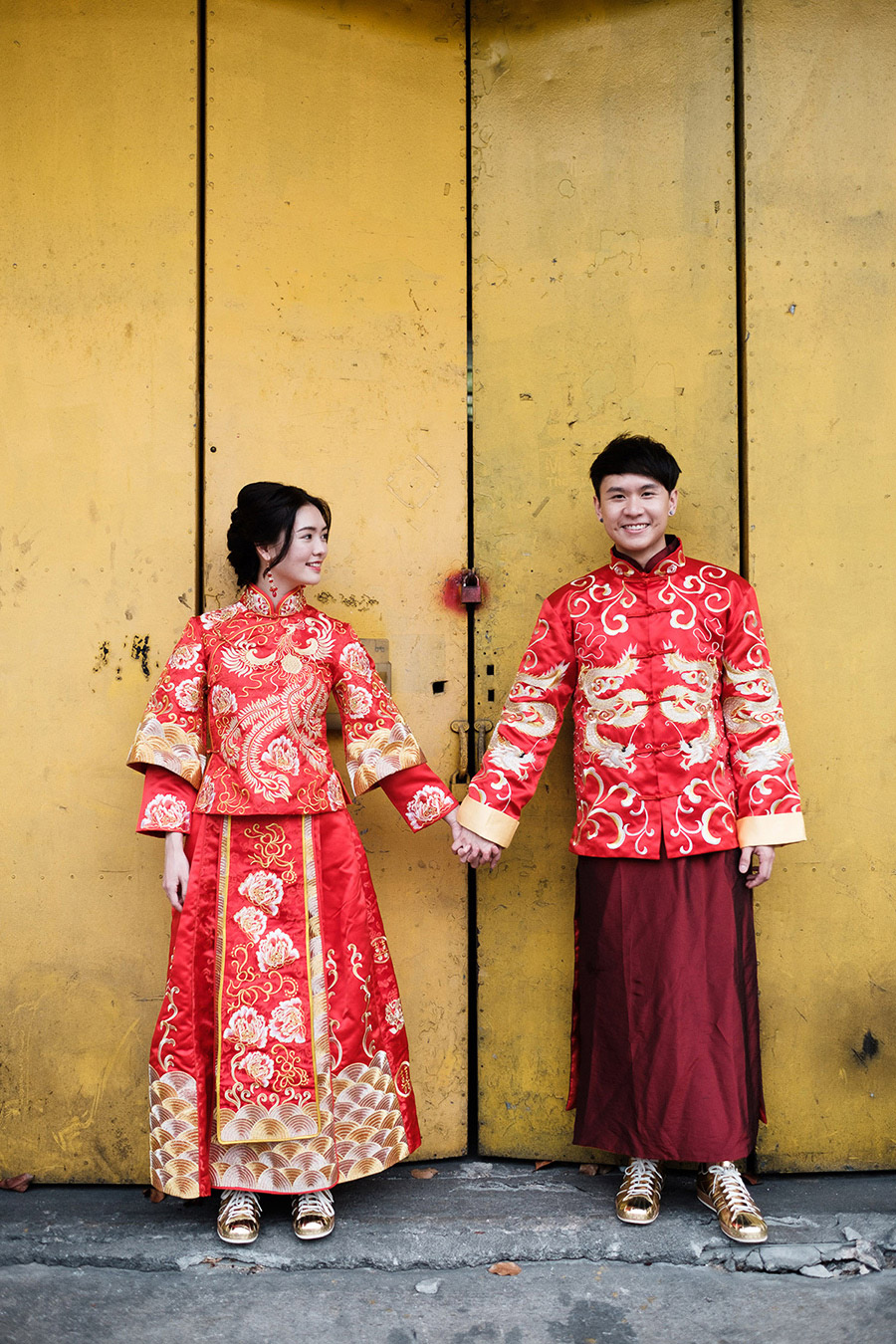 Rather than the typical white wedding dress, traditional Chinese brides don a Qun Kua, also more commonly known as a Kua in Singapore. Consisting of a red, two-piece top and skirt, a Kua is often embellished with colourful threads, pearls, and sequins, and is usually embroidered with an exquisite dragon and phoenix down the front, which symbolises the perfect harmony between the bride and groom. Other popular motifs include peonies, which represents wealth, love, beauty, and honour, and a pair of Mandarin ducks, which represents fidelity and an everlasting union. 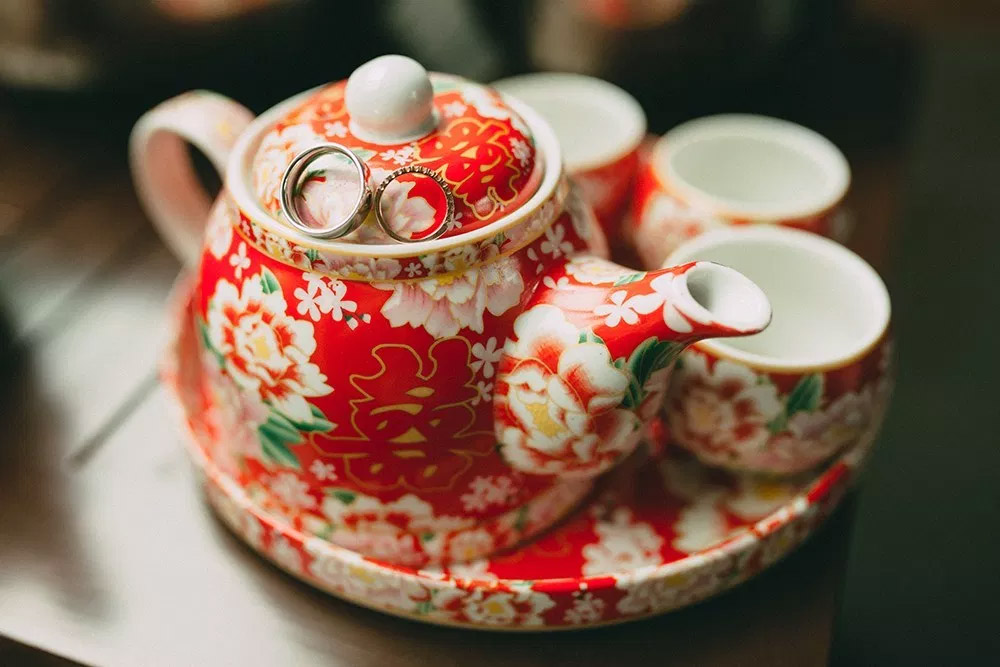 A quintessential tradition, it is during the tea ceremony that both families are introduced formally, and where both the bride and groom give their thanks to the elders of the family by pouring and offering Chinese tea.

Brewed with red dates, lotus seeds, and longans, the sweet tea is a sign of fertility and a smooth, harmonious relationship between all parties. Often an intimate affair, there are plenty of rules to play by here – for example, the parents must be served first, followed by all other relatives in order of seniority. There are also other rules that dictate the positions of the bride and groom, and how to formally address each family member. 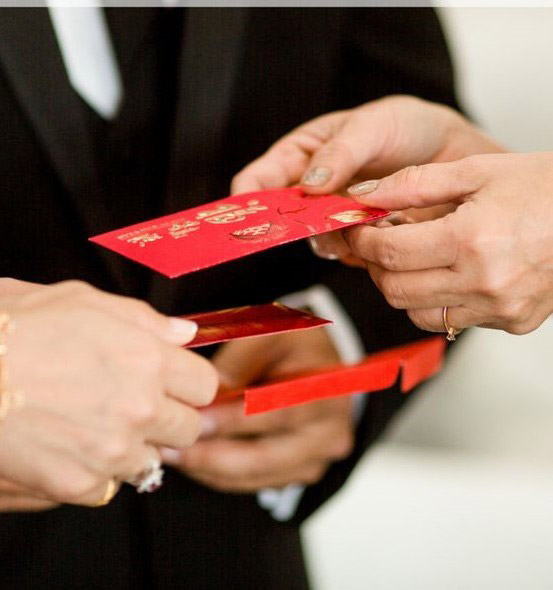 After paying all the necessary respects during the tea ceremony, it’s finally time to officiate the wedding at the final wedding location!

Chinese weddings are often an extravagant and lavish affair that is held at a grand location, such as a hotel ballroom. Unlike our Western counterparts who have a gift registry for guests to shower the lovebirds with presents, here in Singapore, guests are expected to gift red packets instead. The amount you give is meant to thank and congratulate the couple, as well as to help cover the cost of the banquet.

The couple then makes a grand entrance and guests are treated to an 8 to 10-course dinner filled with dishes that further symbolise blessings for the couples, such as fish, duck, and noodles. To end things off on a bang, a loud toast to the couple known as “yam seng” is done, where everyone is expected to raise their glasses and yell out their wishes for the couple’s blissful marriage and everlasting love. 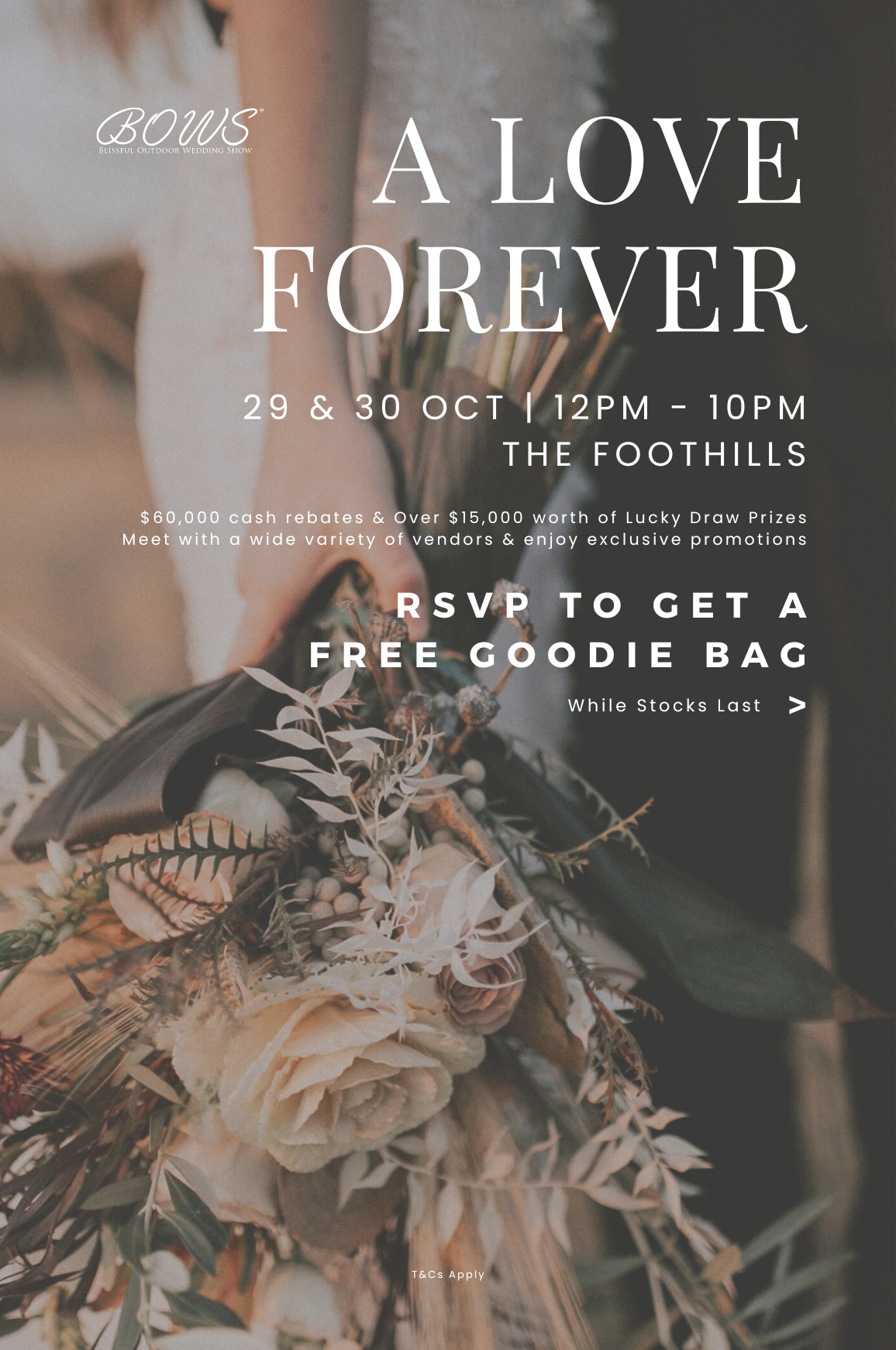