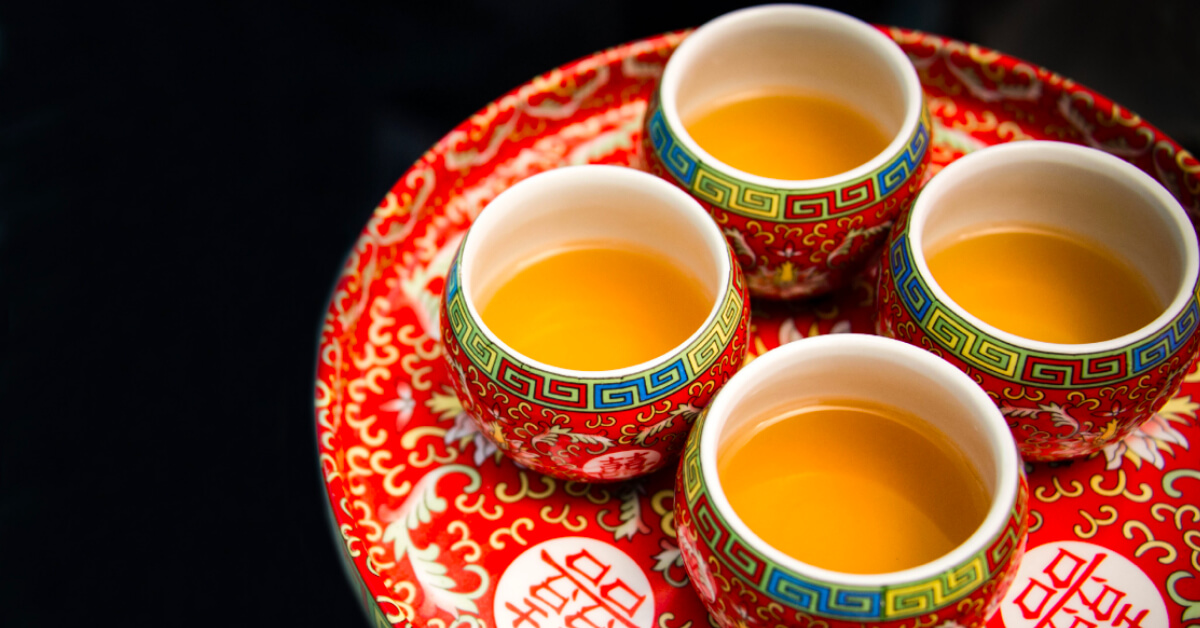 Hailing from Guangdong, the south of China, the Cantonese first arrived in Singapore in the early 19th century and have grown to become one of the major Chinese dialect groups in Singapore.

As with the other dialects, the Cantonese are known for their cultural uniqueness beliefs, traditions and events such as weddings. 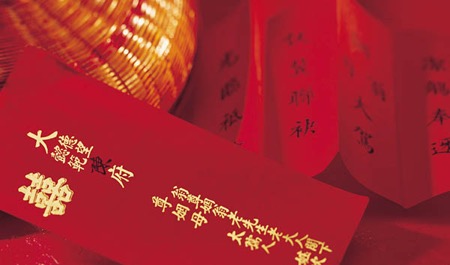 The P'eng Shu (Letter of Betrothal) would kick off the ceremonies at the Narp Ch'oy or betrothal. Customarily written by the potential groom's father, it was sent to the bride's home together with the betrothal gifts and gift list. These gifts were required to be placed in red and gold lacquer boxes and customarily consisted of dragon and phoenix candle, among the various ceremonial items.

The betrothal ceremony also involved symbolic food items such as betel and tea leaves, hard liquor and seafood, to name a few. Amongst these food items, tea leaves were deemed the most crucial as it signified the acceptance or refusal of the engagement.

Following the Narp Ch'oy, was Mun Meng and Narp Kat or Mun Teng. The former was often conducted together with or immediately after Narp Ch'oy while the latter often took place in conjunction with the first two.

Mun Meng was essentially held to request for the bride's father, grandfather and great-grandfather's names to include in the marriage contract-- the second of the Sam Shuas well as to check on her family's history.  While the Narp Kat or Mun Teng was carried out to present the P'eng Shu (Letter of Betrothal). However, neither of these ceremonies are practised today.

With the engagement accepted and marriage contract filled, it was time for Narp Cheng or Kuo Tai Lai. The fourth ceremony, it was carried out to present the Fen Shu (Marriage Contract) and took place in tandem with Narp Ch'oy.

Traditionally, the Fen Shu had to adhere to specific rules. These included a red paper with auspicious phrases and words, the designs of a pair of dragon and Phoenix, a pair of mandarin ducks and the Gods of Harmonious Union. The Fen Shu also had to include details of the couple's horoscope. However, the dawn of legally-binding marriage certificates, this document has grown obsolete.

Along with the offering of the marriage contract, this ceremony required symbolic food such as dragons and Phoenix-shaped cakes for the bride's family and relatives.

Once the marriage contract was accepted by the bride's family, Ch'eng K'ay or the selection of wedding date ceremony will commence between both families. Though the groom's family tended to be the decision makers the ceremony served as an illusion to determine otherwise. These days, couples simply opt to speak to a geomancer for auspicious dates. 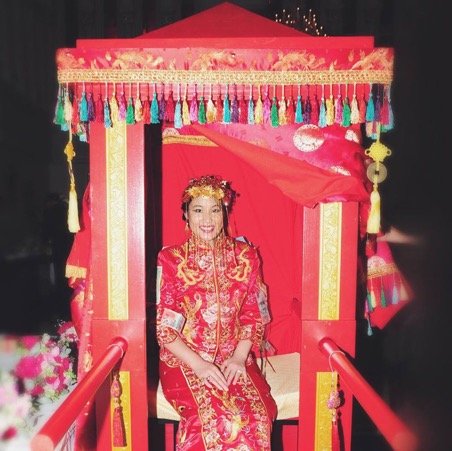 Upon the completion of Ch'eng K'ay, the final ceremony, Ch'an Yeng or 'welcoming the bride' will commence on the actual wedding day. During Ch'an Yeng, the matchmaker would head over to the bride's house at an auspicious hour, with a red sedan chair, a Chinese brass band and the Yeng Shu (Letter of Welcome), the last of the Sam Shu. Apart from delivering the letter, the matchmaker had to persuade the bride's parents to allow her to proceed to the groom's home.

However, in present-day Cantonese weddings, the groom assumes the role of fetching his bride and while he no longer has to persuade his in-laws, he will have to haggle for an 'entry fee' to the bride - a Cantonese practice that can also be seen in other dialect groups. 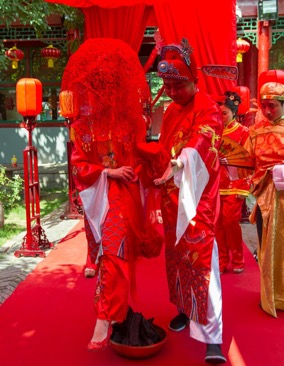 Upon arrival and before entering the groom's home, the bride would walk over a patch of grass or area lit on fire, to ward off evil. As with other traditions, this too has faded. However, some families may still require brides to step over a lit charcoal stove.

The wedding day also included the tea ceremony, where the couple would express the utmost gratitude to their parents (and in-laws) for bringing them up. It was also during this time where the groom would gift the bride with a pair of matching dragon and Phoenix bangles, to signify a harmonious and balanced union, which she will have to wear for the rest of the day.

Apart from these six 'official' wedding ceremonies, various other rituals such as, The Expression of Regret, Capping Ceremony, Sending of Dowry and Tea Ceremony were also practised in Cantonese weddings. While the majority of these ceremonies, save the Tea Ceremony, are no longer practised by modern-day couples, they were once significant in the Cantonese culture. 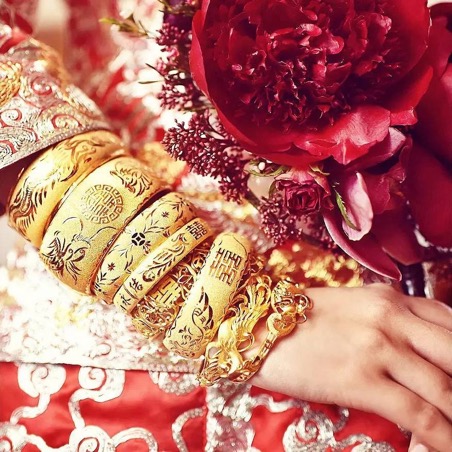 Examples of dragon and Phoenix or double happiness bracelets

As with the ceremonies, other aspects of a traditional Cantonese wedding such as its bridal jewellery and costumes have changed with time. For example, while the modern brides remains adorned in gold accessories, tradition required them to sport ornate gold necklaces with designs of either the dragon and Phoenix or the 'double happiness' characters. Traditional brides may have also been required to don silver bangles around the ankles, a practice that has since been discontinued. 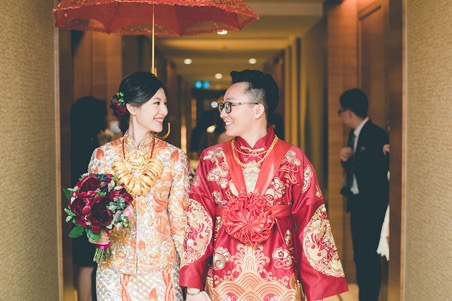 A modern take on the traditional wedding outfit

Bridal outfits, on the other hand, were traditionally known as hong gua. It usually consisted of an ao, a cotton jacket, jiao dai, a hoop belt, mang chu, a skirt and yun jian, a cloud collar.  Red shoes or wooden sandals, a symbol of new life as a married woman, completed the ensemble. Traditional brides also donned a headgear such as a Pheonix cap, to imitate the Ming empresses' crown.

Similarly, grooms were traditionally seen in the official dress of a Manchu man, complete with badges of rank onto his coat. He would also be adorned with a small black satin cap with cypress leaves or gilt sprigs for decoration. However, present-day couples tend to lean towards a more sophisticated version of the traditional outfit or the western wedding outfits of gowns and suits to adapt to the changing times and personal preferences.

Tradition and culture are known to change and/or fade with time. While it may not be ideal in the current day and age, it was once part of the culture's foundation.

To learn more about the wedding practices and traditions of the Cantonese and other Chinese dialect groups, visit the Then & Now: Celebrating Chinese Wedding Traditions Exhibition from 25th to 31st May at SCCC Kwan Im Thong Hood Cho Temple Gallery, Level 2. 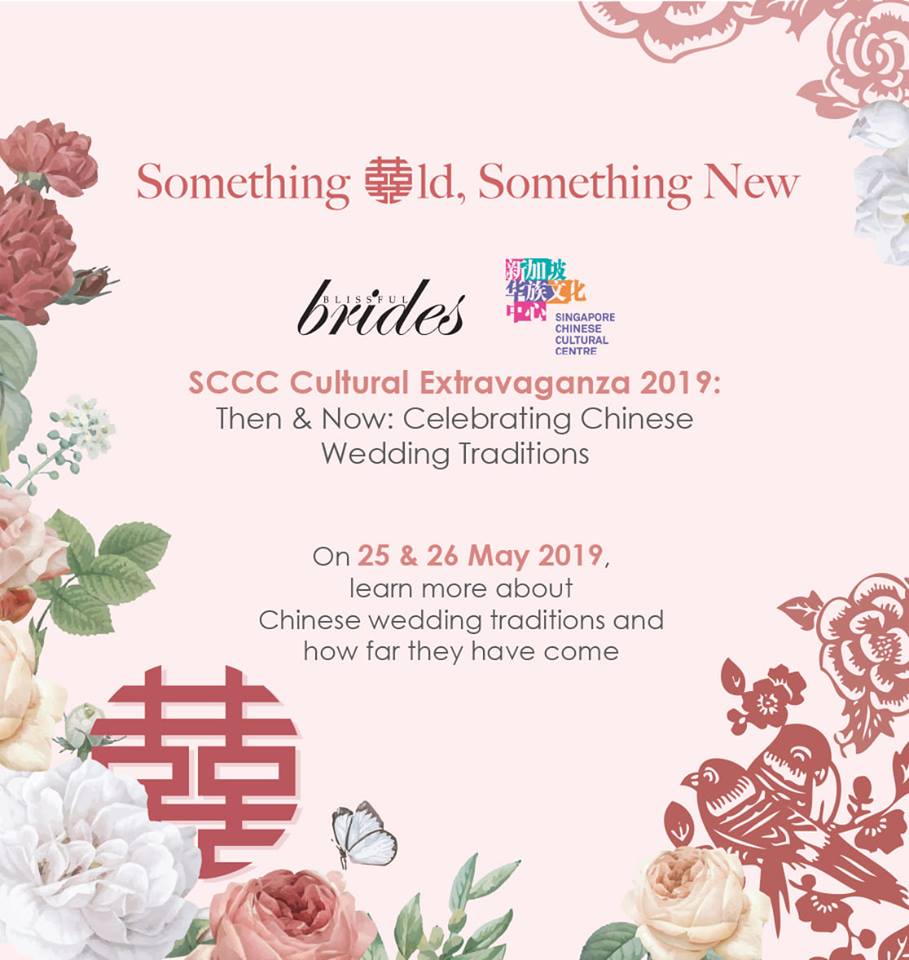 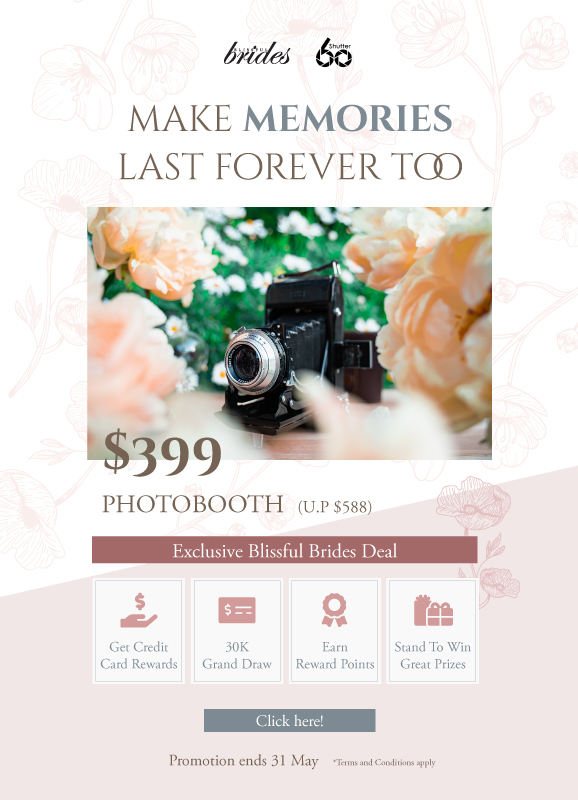