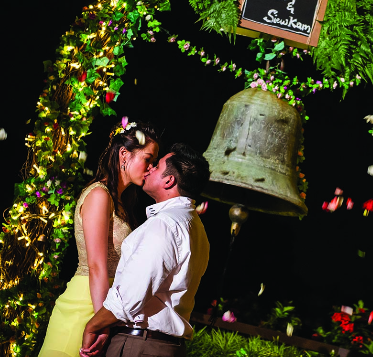 Gavin and I met online, during a time when he was living in Shanghai and I, in Singapore. We found many similarities between us and finally had our first date in Hong Kong – which lasted three and a half weeks! We also travelled together from Hong Kong to Shanghai, Singapore, Beijing and Malaysia, even meeting each other’s family in between.

We were celebrating my birthday in Pangkor Laut on a private sunset boat trip, and pretending to propose to each other for fun. When it came to Gavin’s turn, he whipped his iPad out and played a video of a ring that he designed for me. His excuse was that he made it while he was bored at a conference. I believed him! At the end of the video, he whipped out the real ring and proposed to me. I finally realized it was not a joke! It was a real surprise and so true to our spirit of craziness, spontaneity and romance.

In the morning, I wore a custom-made cheongsam from Shanghai to match Gavin’s mandarin collared shirt and suit from Shanghai Tang, because the day-time tea ceremony is part of Chinese tradition. I wore an open-backed Monique Lhuillier ‘Scarlet’ gown for the solemnisation in the evening, and Gavin wore a traditional Indian sherwani because he is part Indian.

Gavin first visited the Faber Peak (previously known as the Jewel Box) years ago and decided he wanted to get married there. I have always wanted an outdoor wedding, mostly because I really love garden parties.

The reception was hosted on the top of Mount Faber overlooking Sentosa and the city.We got solemnized at 6.45pm while the sun was setting, and partied after. The theme was a romantic chic cocktail party, where the women were adorned in flowers and soft pastel yellow chiffon dresses and looked like garden fairies. There was also an open bar with a talented mixologist and New York style chalkboards. We wanted to replicate W Hotel’s ambience, and had lighted cubes and bar stands throughout the venue to complement the romantic soft candle lights.

The vows made us fall in love with each other all over again. There was also a surprise cartoon video outlining our relationship. As for the drinks, the refreshingly cool mixed berry iced daiquiri was all snapped up within the first hour of the wedding!